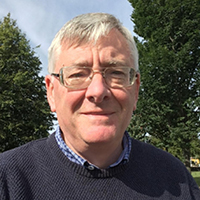 Columnist and commentator, notably on Brexit and the European Union. Irish Permanent Representative to the EU (2005 to 2009), to the United Kingdom (2009 to 2013) and to Italy (2013 to 2017). Ambassador to Malaysia (2000-2001). He worked in the three major institutions of the European Union: seven years representing Ireland in the Council of Ministers; four years at the European Commission working in the cabinets of Irish Commissioners and three years as an official of the European Parliament. Also worked on EU issues in Dublin for more than 13 years, including as EU Director General at the Department of Foreign Affairs from 2001 to 2005. Writings include: Original Sin in a Brave New World – the Paradox of Europe, a book about the nature of the European Union; The Intergovernmental Conference: How the deal was done, an account of the negotiation of the EU Constitutional Treaty contained in The Genesis and Destiny of the European Constitution (Bruylant 2007); a collection of speeches on British-Irish relations: Irish Friends and Friends of Ireland; and Inside the Mind of a Permanent Representative (an essay explaining what goes on inside the mind of an EU negotiator). Education: Gonzaga College Dublin and Balliol College Oxford. Married. Four daughters.