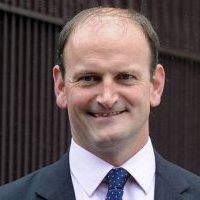 Douglas Carswell was elected to the House of Commons in 2005 as a Conservative, before switching to UKIP in 2014.  He called and won a by election to obtain the permission of his voters as he did so.  He co-founded Vote Leave, the official campaign that won the referendum to leave the European Union.  Douglas stood down from Parliament at the last election having achieved what he entered politics to do.  His book Progress Vs Parasites, a history of 3,000 years of human progress, was published by Head of Zeus in June.