I’d like to begin by exhorting everyone to avoid the collective sigh the mention of the phrase ‘fiscal space’ produces. It is not only a very important concept; it is part of our law. It is a remarkable thing, in many ways. Our Constitution now has an economic theory embedded within it. How we choose to measure the concepts the theory gives rise to matter for the welfare of our citizens. This is pretty unique, and it has some important risks, both upside and downside.

We measure the economy as the sum of the activities of its households and firms, its government, and its trade with the rest of the world. When the value of those activities grows, we say the economy has grown. The modern concept is biological. It comes from D’Arcy Thompson’s great, unreadable masterwork ‘On Growth and Form’. Thompson defined growth as a change in structure. Economic growth measures this structural change in a very particular and not very satisfactory way.

When the economy is growing, tax revenues increase. The government can choose to increase spending on particular areas or pay down some of its debt. The government can increase public sector pay, increase current spending by increasing transfers like child benefit, or increase capital spending, like building new houses and hospitals. In Ireland, the government has spent every penny it had when it had it. One way of seeing this is to look at the change in the amount of voted expenditure every year. You can see when we had it, we spent it. You can also see how volatile it is, relative to the same measurement for Portugal. 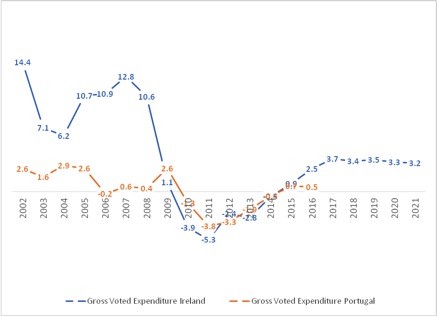 You can also see the impact of the crisis, the volatility of our government’s finances, and of the imposition of the fiscal rules themselves. The fiscal rules say pretty reasonable things. Your debt levels shouldn’t be above 60 per cent of your output, you can’t run a budget deficit forever, and so forth. Imposing the rules on a small open economy institutes a kind of meta-discipline. The rules force the political system to open up. It must declare how much cash it expects to have and where it would like to spend into the future. You can see the ‘dampening’ effect forecasting using these rules is having on the chart out to 2021.

We calculate the fiscal space assuming a level of growth and asking a simple question. If growth stayed like this, if we didn’t change taxes or spending, how much ‘extra’ would we have to spend while staying within the fiscal rules?

Okay so that’s not actually a simple question. We need to break it down a bit.

First we need to assume a rate of growth. This comes from a model that treats Ireland like it treats Germany. It is a ‘commonly agreed methodology’. This methodology is harmful to Ireland’s interests, because tiny open economies are not the same as giant ones.

Second, when we assume a fixed level of spending, we have to do it without indexing spending levels for inevitable increases, such as those caused by demographic changes.

We are talking this week about volatility and turbulence. It’s worth thinking about how much volatility there is in Irish data. 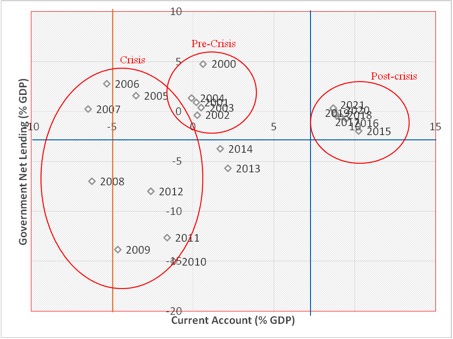 Today’s finance minister must ‘tune’ their policies to fit the fiscal rules. This is very hard in a tiny open economy. They should not run budget deficits of more than -3 percent of gross domestic product, for example.

Under the macroeconomic imbalance procedures of the Eurozone, countries should keep their current accounts between plus 6 percent and minus 4 percent of GDP. This creates a tight ‘corridor’ for economic policy makers to work within, and helps us define what a crisis looks like in macroeconomic terms.

A scatterplot of Irish government budget deficits and current account balances from 2000 to the forecasted values of 2021.

The figures exclude the cost of bank recapitalisation, which was -22% of GDP in 2011. The lines show the limits of the ‘six pack’ rules and the macroeconomic imbalance rules described above.

Three ‘regions’ can be defined. The first, pre-crisis region from 2000 to 2004 has a very small government surplus and positive current account balance. The second region shows the deterioration of first the current account (as inflows of funds from the rest of the world dwarfed the value of our exports to the rest of the world), and then the government’s net lending as it supported the failing public finances with borrowing from the international bond market and then with official support from the IMF, European Central Bank, and European Commission as well as bilateral loans from countries like the UK and Denmark.

The government’s position improved markedly from 2009 to 2014, as did the current account. The third region shows that from 2015 to 2017 the government essentially ran a balanced budget, with a positive current account balance, and this relatively benign environment is forecast to continue until 2021. The picture is simply one of volatility and turbulence.

The fiscal space for Ireland looks like this for the next few years. 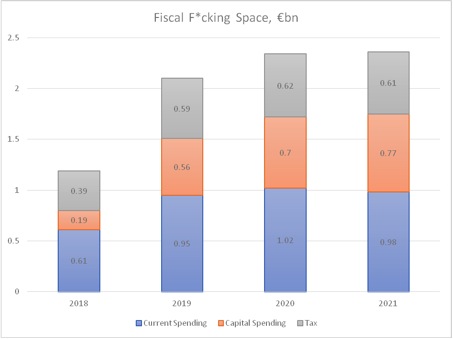 You can see a very simple connection between current, capital, and tax cuts under the regime, it’s roughly 1: 1: 1 after 2018.

The way we spend the fiscal space will define the structure of our economy into the future. Here’s what has happened to the main components of spending since the 1990s, indexed to the peak of the crisis in 2007. You can clearly see the destruction of capital spending over this period. It will take our policy system another 5 years to reach the long run average. 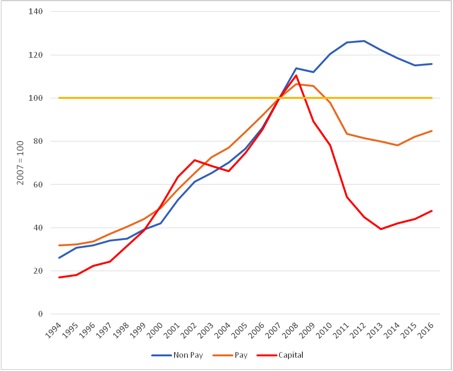 The fiscal space is here to stay, but it does not connect the gap in capital spending to the needs of our system. Rather it exacerbates the gap that exists and will grow. The way forward is to focus on capital spending and our capacity for that spending. 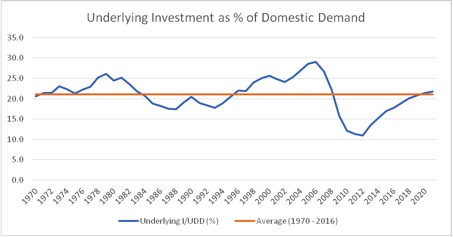 Ultimately our social structure is highly resilient to large crises. One reason for this is the extent of our social protection system, which helped to anchor Irish households through truly bad times. 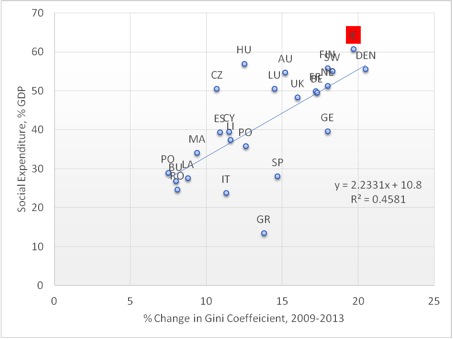 As good as it is, I think the argument for its extension is limited. Instead it is clear the gap in infrastructure: houses, health, and education in that order, should be prioritised from now until 2021.