‘So distribution should undo excess, and each man have enough’
King Lear, Act 4, Scene 1

In this paper I examine income inequality in Ireland. I do not consider the position in relation to wealth other than to note that household net worth at the end of 2015 was estimated by the Central Bank at €626 billion. If we add pension rights of almost €100 billion in the public sector, total wealth is in excess of €700 billion. We have no good information on the distribution of wealth (including pensions) other than almost 60% is owned by those over 55. [1]

The measures I present in this paper are based on snapshots (cross section) in particular years. If we looked at income inequality from a lifetime perspective, international evidence suggests that it would be significantly less. A lot of inequality is temporary in nature, reflecting either the stage of life an individual is at or the transitory shocks they experience. UK research estimates [2] a Gini coefficient for gross income in the cross section of 0.49 compares with 0.28 across the whole of adult life.

Sources: ‘Voitchovsky et al. (2012)’ and ‘Holton and O’Neill (2015)’ present the results sourced from the corresponding study.

The Irish income tax system (including USC and PRSI) is the most progressive in the OECD (OECD Taxing Wages 2016). The Irish system is most effective (both absolutely and proportionately) at reducing inequality, significantly ahead of the next most progressive countries Belgium, Finland and Greece).

Market income inequality in Ireland is the highest in the OECD (OECD Economic Survey Ireland 2016). Market income is income before taxes and social transfers.

Why is market income inequality so high?
Ireland’s high inequality of market incomes largely reflects its uneven distribution of labour earnings. This is associated with the returns to tertiary education and the penalty for poor education both being higher in Ireland than the OECD average. A high share of the workforce with tertiary education earn more than twice the median income. A possible contributor to the high earnings premium for tertiary education is the strong presence of multinationals, which offer highly paid jobs to those with high skills. By contrast, those with below upper secondary education are concentrated at the bottom of the income distribution. These skill-based wage differentials have important effects on the overall distribution of earnings because Ireland has a higher percentage of 25-64 year olds with a tertiary degree (40% versus 33%) and about the same share of those with below upper secondary education as the OECD average of 24%.

Deprivation
Deprivation is measured by the Central Statistics Office by asking survey respondents if they have experienced any of the following eleven types of enforced deprivation. If respondents identify themselves as having experienced two or more of the items, they are regarded as deprived.

The eleven indicators which measure deprivation are:
1. Two pairs of strong shoes
2. A warm waterproof overcoat
3. Buy new (not second‐hand) clothes
4. Eat meal with meat, chicken, fish (or vegetarian equivalent) every second day
5. Have a roast joint or its equivalent once a week
6. Had to go without heating during the last year through lack of money
7. Keep the home adequately warm
8. Buy presents for family or friends at least once a year
9. Replace any worn out furniture
10. Have family or friends for a drink or meal once a month
11. Have a morning, afternoon or evening out in the last fortnight for entertainment

Deprivation Rates
Deprivation rates have increased significantly reflecting the impact of the economic crisis. They have now reached very high levels in one-parent households, those living in rental accommodation (at below market rent or rent free), and the unemployed. In 2014, 29% of the population experienced two or more types of enforced deprivation.

Table 1 below shows the deprivation rate experienced by three different age cohorts: namely 0-17 years, 18 to 64 years, and 65+ years. Deprivation rates are shown over the period 2008 to 2014.

Deprivation by Income Decile
Figure 1 below shows the changes in the deprivation levels experienced between the ten different income deciles. Deprivation has increased across all deciles, with the largest increases in the bottom half of the income distribution. 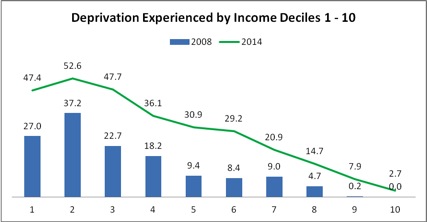 Deprivation rates have increased across the Irish population. Deprivation has increased most among those in the lower and middle income deciles since 2008. The younger age group (0-17 years) has a significantly higher likelihood (36.1%) of experiencing deprivation in contrast to those aged over 65 years (14.3%). Lone parents had the highest deprivation rate (58.7%) in 2014.

Consistent Poverty
An individual is defined as being in ‘consistent poverty’ if they are identified as being at risk of poverty and living in a household deprived of two or more of the eleven basic deprivation items listed above. (For example, a household may not have a roast once a week. The household is classified as deprived of this basic indicator only if the reason they didn’t have it was because they could not afford it.)

Jobless Households
An important contributory factor to poverty and deprivation is lack of work.

The more work a household does, the less is the household’s risk of poverty. Ireland has the highest levels of very low work intensity households in the EU. Households with least work are 27 times more likely to be at risk of poverty than those with most work.

Collins has estimated taxation as a percentage of gross income based on the Household Budget Survey 2009/10. The analysis finds a regressive indirect taxation structure with the average household paying just over 10% of its gross income in indirect taxes. 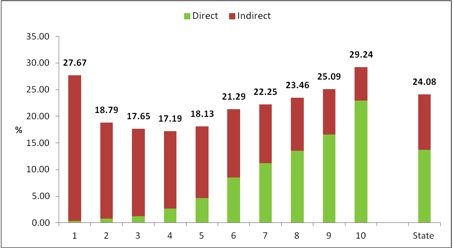 People in the top decile pay over 20 per cent of their gross income in direct tax. As a result their disposable income is 80 % of their gross income. Since VAT paid is related to expenditure, a proportional VAT will by definition be regressive as a percentage of income. This impact is mitigated in Ireland (uniquely in the EU with the exception of Malta and the UK) where food which accounts for a sizeable part of the expenditure of low income people is zero rated for VAT. For example, Finland charges 14 % and Denmark charges 25 % on food – so our VAT system is more progressive than other countries.

The claim that VAT is a highly regressive tax rests on the fact that for the people in the lowest 10 per cent of the income distribution (the bottom income decile), VAT expressed as a percentage of income is extremely high. The main reason for this is that in the bottom decile in Ireland, expenditure is almost double recorded income (186%). See Chart below.

Expenditure as % of Income by Decile 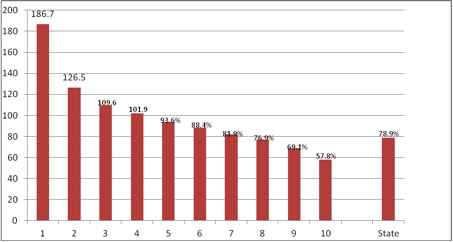 Research [5] shows that households with the lowest recorded incomes on average tend to have higher living standards than is indicated by their household income (where living standards are measured by expenditure, consumption and/or material deprivation).

“Results based on Household Budget Survey data at low income level may be misleading due to the presence of households with transitorily low income. For example, many self-employed workers may have low income levels at certain stages of their businesses’ development but will continue to have unaltered (high) expenditure. Alternatively some households may be drawing down savings to fund their consumption; in either case it is likely to be misleading to consider them “low income” households for distributional analysis” [6]

Excises are among the most regressive taxes particularly in the case of tobacco. In Ireland those in the bottom decile spend absolutely more on tobacco than those in the top decile. Reducing tax on tobacco would be the single most effective tax change to increase the progressivity of the system. However, incidence of smoking and smoking related diseases is higher among poorer people. Successive governments have decided (rightly in my view) that the health argument that higher excise duties discourage smoking is more important.

Almost 40 % of households in this category did not have medical cards. The annual equivalised weekly income of this group was below €181.04 in 2014. The Basic Supplementary Welfare Allowance [8] plus Child Benefit in 2014 was in excess of these amounts.

As a result it is clear that those in the bottom decile are not in receipt of basic social welfare benefits. Possible reasons for this include:
• They are entitled to benefits but are not claiming them.
• They are not entitled to benefits because while their income is low they fail the means test due to their holdings of assets.
• They are self-employed and have very low incomes or are making losses during the survey period.
• They are in full-time education.

How Can Ireland Reduce Inequality?
By international standards, Ireland provides generous social family support. Social transfers are funded by a progressive tax system. Other policies to reduce inequality should be directed at investment in education particularly among the disadvantaged and taking steps to tackle the very high level of jobless households in Ireland.

Conclusion
Choices about the precise degree of redistribution in society involve trade-offs between the need to preserve an appropriate incentives to work, save and invest and to ensure that everyone enjoys an adequate standard of living. This paper makes no attempt to suggest where that balance should be struck but merely to set out what is the current position in Ireland and how we compare with other advanced countries. Choices in this area inevitably involve value judgements and are questions that ultimately must be resolved by politicians.

Notes:
[1] Household Finance and Consumption Survey 2013, CSO
[2] Redistibution from a Lifetime Perspective, IFS Working Paper W15/27, Peter Levell, Barra Roantree and Jonathan Shaw
[3] The EU indicator of ‘very low work intensity’ is where less than 20 per cent of available adult (up to age 59) time is allocated to paid work. Most very low work intensity households have no working age adult in employment.
[4] Fintan O’Toole, Irish Times 29 September, 2015
[5] See Brewer, O’Dea, Paull and Sibieta (2009)
[6] “The Distributional Effects of Consumption Taxes in OECD Countries, OECD Tax Policy Studies No 22, 2014 Page 28
[7] The Survey on Income and Living Conditions (SILC) is an annual survey conducted by the Central Statistics Office (CSO) to obtain information on the income and living conditions of different types of households. A representative random sample of households throughout the country is approached to provide the required information. The survey is voluntary from a respondent’s perspective; nobody can be compelled to co-operate.
[8] Supplementary Welfare Allowance provides a basic weekly allowance to eligible people who have little or no income. This is a means tested payment and the provision of Basic SWA payment (BSWA)is very similar to the provision of primary payments such as Jobseekers Assistance. People with low incomes may also qualify for a weekly supplement payment under the Supplementary Welfare Allowance Scheme to meet certain special needs, for example, help with rent/mortgage interest payments or for urgent or exceptional needs. In 2013 supplementary welfare payments.