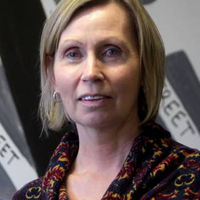 Linda Ervine is a language rights activist from East Belfast. She is a speaker and supporter of the Irish language and is the project leader of the Turas Irish language project which “aims to connect people from Protestant communities to their own history with the Irish language”. Turas is operated through the East Belfast Mission of the Methodist Church.  Ervine, coming from a Protestant background supports Northern Ireland remaining within the UK; her family supported socialism and trade unionism when she was growing up. She is the sister-in-law of the late David Ervine, a former member of the UVF and later political thinker and leader of the Progressive Unionist Party.  Her husband, Brian, was also leader of the PUP.  She stresses the Protestant history of association with the Gaelic language and has urged politicians from the Ulster Unionist Party and the Democratic Unionist Party as well as the Orange Order not to view the Irish language and culture as exclusively the domain of republicanism.