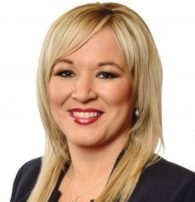 Michelle O’Neill has been Vice-President of Sinn Féin since 2018 and Leader of Sinn Féin in the in the Northern Ireland Assembly since 2017. She has been a member of the Legislative Assembly for Mid-Ulster since 2007.  She served as Minister for Agriculture & Rural Development 2011-2016 and Minister for Health 2016-2017.

From an Irish republican family in Tyrone, she attended St Patrick’s Girls’ Academy, a Catholic grammar school in Dungannon. She began training as an accounting technician before getting involved in politics. She worked with her father, a Sinn Féin councillor in Dungannon, while still in her teens. She joined Sinn Féin in 1998 at the age of 21 and started working as an advisor to Sinn Féin  councillor, Francie Molloy, before being elected herself to the Dungannon and South Tyrone Borough Council. She was elected as Mayor of Dungannon and Sth Tyrone, the youngest ever and the first woman to hold the position.