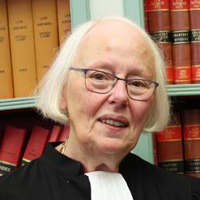 Ms Justice Mary Laffoy, President of the Law Reform Commission, graduated from University College Dublin with a B.A. degree in 1968. Subsequently, between 1968 and 1971 she studied law at University College Dublin and at the Honourable Society of King’s Inns in Dublin. She was called to the Bar in July 1971. She practised as a barrister from the Michaelmas term in 1971 until her appointment to the High Court. She was admitted to the Inner Bar in the Michaelmas term of 1987. She was appointed a judge of the High Court in April 1995. While on the High Court Bench, she was primarily involved in civil litigation, principally in the area of chancery law. She was appointed to the Supreme Court in October 2013 and retired in June 2017. Ms Justice Laffoy chaired the Citizens’ Assembly from July 2016 to June 2018, when it published its Final Report. In October 2018, she was appointed President of the Law Reform Commission.