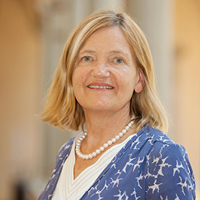 Brigid Laffan is Director and Professor at the Robert Schuman Centre for Advanced Studies, an inter-disciplinary research centre at the European University Institute. The Centre’s mission is to contribute to research on the major issues facing contemporary European society. Previously she was Vice-President of UCD and Principal of the College of Human Sciences from 2004 to 2011. Brigid Laffan is recipient of numerous awards: in 2005 she was elected Member of the Royal Irish Academy and in 2010 received the Ordre nationale du Mérite from the President of the French Republic. Her scholarship has been recognised by the THESEUS Award for Outstanding Research on European Integration in 2012, and the Lifetime Achievement Award for contribution to the development of European Studies in 2014 by the UK Association for Contemporary European Studies (UACES). Brigid’s research focuses on the dynamic of European integration. Recent major publications include her co-edited book Core-periphery Relations in the European Union (London: Routledge, 2016, 311pp) and Europe’s Union in Crisis: Tested and Contested’, Special Issue, West European Politics, 2016, 39:5.