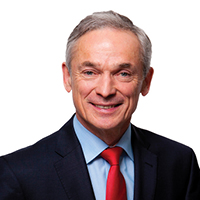 Richard Bruton T.D. was appointed Minister of Communications, Climate Action & Environment on 16 October 2018. Earlier this year, the Minister launched the Climate Action Plan, with actions across all sectors of society- heat, transport, agriculture, enterprise, housing and the public sector.  The Climate Action Plan will deliver a radical step up in Ireland’s response to the climate challenge and will ensure we reach our 2030 climate commitments. The Minister previously served as Minister of Education and Skills in the current Government. The Minister also implemented the Action Plan model here, with the ambition to make Ireland’s education system the best in Europe within a decade. In the previous government Richard served as the Minister for Jobs, Enterprise and Innovation during the worst downturn in recent history. The Minister’s Action Plan for Jobs was launched at a time when 20% of private sector employment was wiped out. The Plan set out to create 100,000 jobs. Since the launch, approx 450,000 jobs have been created. Richard was Minister for Enterprise and Employment from 1994 to 1997 when 1,000 jobs a week were being created in Ireland. He served as Minister of State at the Department of Industry and Commerce, from 1986 to 1987.