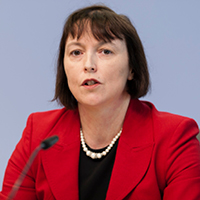 Sharon Donnery was appointed Acting Governor of the Central Bank of Ireland for the period running from 1st June to 31st August 2019. She has held the position of Deputy Governor, Central Banking since 1 March 2016. She continues to perform her role as Deputy Governor during her period as Acting Governor. As Acting Governor, she is a member of the Governing Council of the European Central Bank (ECB). Sharon also represents the Central Bank of Ireland at the European Systemic Risk Board (ESRB). Sharon was appointed Chair of the ECB Budget Committee (BuCom) in December 2016. She previously served as the Central Bank’s Alternate Member of the Supervisory Board of the Single Supervisory Mechanism (SSM), and Chair of the SSM High Level Group on Non-Performing Loans (NPLs). Sharon joined the Central Bank in 1996 as an Economist in the Monetary Policy Division and has held a range of senior positions as head of division. From February 2013 to August 2014, she held the statutory position of Registrar of Credit Unions and from April 2014 to May 2016 was Director of Credit Institutions. She was also vice-Chair of the European Banking Authority’s (EBA) Standing Committee on Consumer Protection and Financial Innovation. Sharon holds a BA in Economics and Politics and an MA in Economics from University College Dublin.