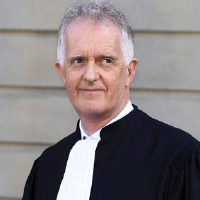 The Hon. Mr. Justice Peter Charleton, judge of the Supreme Court of Ireland, commenced practice at the Bar of Ireland in 1979 and was appointed a Senior Counsel in 1995. From 2002 to his appointment as a judge of the High Court in 2006 he was counsel to the Morris Tribunal; a statutory enquiry which looked into misconduct in the Garda Síochána (Irish police). In the High Court he was assigned principally to the commercial list. Mr. Justice Charleton was appointed to the Supreme Court in July 2014. A Dubliner, he is married with children. He has published papers in journals, including the Maastricht Journal of European and Comparative Law, the International Journal of Law and the Family, the Yearbook of the International Commission of Jurists, Intellectual Property Law and Policy, the Journal of Criminal Law, the Bar Review, the Journal of the Judicial Studies Institute of Ireland, the Irish Law Times, the Gazette of the Incoporated Law Society of Ireland and the Irish Criminal Law Journal. His books include Irish Criminal Law (1999, Butterworths, with McDermott and Bolger), and an analysis of human destructiveness, Lies in a Mirror: An Essay on Evil and Deceit (Blackhall Publishing, 2006). He lectured from 1986 to 1988 in Trinity College Dublin, from which he graduated in 1980. He is the Irish representative on the Colloque Franco Brittanique Irlandais. Peter Charleton was a founder member of the RTÉ Philharmonic Choir and was chairman of the National Archives Advisory Council from 2011 to 2016.