INTRODUCTION
Housing – or the lack of it – is to the forefront of many discussions these days, from the radio station to the dinner table. Much of the discussion revolves around the same topics of increasing supply, making it easier to build and making it affordable to purchase.

To my mind, however, there are some questions that never get asked, like:
1. How much control does the state really have over housing and the demand for housing?
2. How many houses are we really building every year? and
3. Where does the ownership of property – and the rights and obligations it brings – fit into this discussion?

I. STATE CONTROL OVER HOUSING DEMAND
Demand for housing is the real issue. Supply reacts to demand, or not in Ireland’s case at the moment. So, what are the drivers of demand?

1. The main driver of demand for housing is the headship rate. This is essentially the number of households that are forming. As people stay single for longer [average marriage age is now 34], or stay single forever (soon it will be 1/3rd of all households), family breakup (9.7% of marriages), empty nesters/holiday homes – these all drive demand for housing and the state has little control over them.
2. The second cause of housing demand is obsolescence and I’ll return to that shortly.
3. The third major driver of housing demand is population growth. In 2016 c.16,000 additional people came to Ireland, 50% of whom chose to live in Dublin city. This has public policy implications.
4. Finally comes immediate demand. This is the pressure caused by people trying to find houses to live in at this very moment and the factor that generates most discussion despite it being only the 4th largest driver of housing demand. (The problem is exacerbated as c.50% all new houses are one-off and never come to the market.)

It is difficult for any state to control some of these factors. It also means that real demand for housing is closer to 40,000 units per annum and not 25,000.

Obsolescence is the second largest driver of demand, and is perhaps something the State could or should be able to control. This is when houses are allowed deteriorate to a condition where they become uninhabitable. On average, 123 houses become obsolete in Ireland every week, or 6,394 houses a year.

There are a multitude of reasons why this might happen, including:
• neglect (occasionally strategic);
• fecklessness (can’t be bothered);
• financial constraints (can’t afford to rehabilitate the building);
• lack of financial constraints (too much money to care);
• regulation changes;
• family disputes; and
• lack of awareness (especially if owned from overseas).

Obsolescence also affects the official numbers upon which policy is made.

However these official numbers also mask another problem with the way in which we measure housing “completions”. A house completion is not necessarily a new house; a house completion is measured by a new connection to the ESB grid. This could therefore include houses that had been built years ago but never connected, or temporary connections during construction works, or the conversion of a garage to a granny flat, for example. There is estimated to be a 20 percent margin of error in house completion statistics by using this method of measurement.

The following table uses official house completion statistics from 2015 to illustrate the problem. I refer to the 20 percent discrepancy caused by measuring completions by connection to the electricity grid as the “ESB factor”. 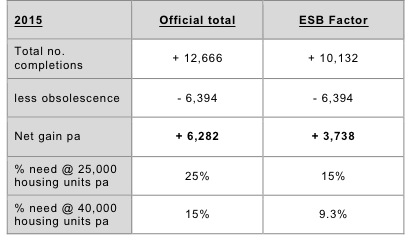 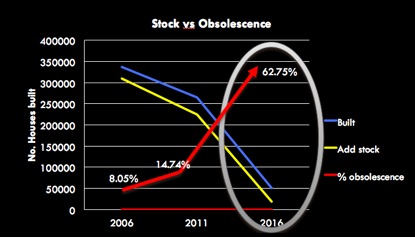 In effect, this means that for every 100 housing units that are completed in the last five years, another 63 on average have been lost to obsolescence, therefore adding just 37 housing units to the overall housing stock. Graphically, this looks as follows, with obsolescence accounted for in red.

It is evident that we have issues in measuring our housing stock. This has several policy implications:

• How is it possible to manage a stock of housing when we have no accurate figures for how large or small it is, or how much we are adding to or subtracting from it each year?

• The impact of obsolescence, as demonstrated above, also highlights that resolving the current housing crisis involves management of our existing stock as much as building new housing stock.

• Obsolescence needs to be a factor in housing statistical calculations and as part of housing policy.

Managing our existing stock better may involve some political challenges, the first being that of ownership.

III. OWNERSHIP AND BETTER HOUSING MANAGEMENT
The ownership of land is a sensitive topic, not just in Ireland. Many events of social significance and indeed social upheavals have had property and the ownership of property at their root. Much power, both collective and individual, such as the right to vote, has also derived from the ownership of property. But to manage property better it may well be necessary to challenge certain assumptions about the rights and obligations of ownership. It’s difficult for the state to manage housing better when everybody wants to control their own stock, but it’s even more difficult for the state to manage housing better if some form of control isn’t taken.

This means that the state may have to ask some questions about ownership, and about itself and how far it is willing to go in order to balance individual ownership rights and national housing management needs.

Some questions that may need thinking on if there is a serious will to better manage our housing stock include:

The courts have shown that they are willing to go further than politicians on issues of property, ownership and their inherent rights. Politicians have been far weaker on issues of ownership, a good example of which is the vacant site levy, which was set at 3 percent of the land’s value – a figure that will challenge no landowner when land values are rising by more than that amount each year.

CONCLUSION
Managing our existing housing stock better is a key factor in resolving the current housing crisis, and one that could have an immediate impact. To do that, however, we need a better grasp on what our stock is and how it is changing each year. Better management may also involve some tough political initiatives in order to encourage owners to use their property and land more productively. The notion of ownership itself, and what it means in Ireland, may be worthy of some immediate reflection.

When discussing housing, it is therefore helpful to bear the following thoughts in mind:

• What can the state control and what can it not?
• What figures are headline figures and what are net figures?
• What are the rights and obligations of property ownership in 21st century Ireland?